After launching nearly a dozen Echo speaker models in India in two years, Amazon said on Wednesday it is adding one more to the mix that addresses one of the most requested features from customers in the nation: Portability.

The e-commerce giant today unveiled the Echo Input Portable Smart Speaker Edition, a new variant in the lineup that includes a built-in battery. The 4,800mAh enclosed battery will offer up to 10 hours of continuous music playing or up to 11 hours of stand-by life, the company said.

“Portability has been one of the most requested features in India,” said Miriam Daniel, VP of Alexa Devices. “You want to be able to carry Alexa with you from room to room within your homes. So we have designed something just for you.”

Other than the built-in battery pack, the new speaker model offers an identical set of features — access to some 30,000 Alexa skills, compatibility with a range of home devices, of course, support for Alexa voice assistant — as other Echo variants. (The new model additionally carries an array of four LEDs that light up when a user taps the power button to show battery level.)

Huawei and Devialet have unveiled a new speaker specifically designed for the Chinese market, the Huawei Sound X. French startup Devialet has been looking at ways to license its technology and patents to consumer electronics manufacturers, such as Sky, Iliad, Altice USA and Renault.

While Devialet only sells very premium speakers under its own brand, such as the $ 1,000 Phantom Reactor, the Huawei Sound X is much more affordable. You’ll be able to buy a pair of speakers for RMB 1,999, the equivalent of $ 285. Unfortunately, those speakers will only be available in China for now.

The pill-shaped design is reminiscent of the Apple HomePod or the most recent Amazon Echo. It features a 60W double subwoofer and 360-degree sound. You can either use the pair of speakers in different rooms or pair them to create a stereo sound system.

The Huawei Sound X has six microphones so that you can control it with your voice. You can also control the speaker with capacitive touch buttons at the top of the speaker.

If you have a Huawei phone, you can tap it on the top of the speaker to hand off music to the speaker. It also integrates with Huawei HiLink, the company’s framework to control your connected objects around your home.

Devialet has been slowly expanding to China with a distribution partnership, two Devialet stores in Beijing and Shanghai and retail stores partnerships. According to the company, China is now the second market for Devialet.

Sonos has a new entry-level connected speaker that will give you all of its multi-room, high-quality sound – without the onboard microphones and smart assistants of the Sonos One. The microphone-free Sonos One SL retails for $ 179.99 ($ 20 less than the existing Sonos One) and comes with AirPlay 2, delivering good functional upgrades over the Play:1 it replaces.

Visually, you’d be hard-pressed to tell the Sonos One from the Sonos One SL, especially at a distance. It has the exact same dimensions, and the same industrial design, featuring a matte black or white finish and controls on the top. Those controls are the one place you’ll notice an obvious difference, however – the Sonos One has an additional LED, microphone icon and capacitive touch surface above the playback controls for turning on and off the built-in smart assistant and microphone. The Sonos One SL, lacking a mic, has none of these.

Unlike the Play:1, Sonos One SL can stereo pair with a Sonos One, which is a nice feature because when using two of these in tandem in one room you actually only need one to have one with a mic for use with Alexa or Google Assistant. Two Sonos One SL speakers will also pair with one another, of course, and with combined savings of $ 40 vs. the Sonos One, these are naturally great candidates for use with the Sonos Beam for a home theater surround setup.

Of course, you can also still use the Sonos One SL in combination with a smart assistant – just like you can with any other Sonos speaker, so you can specify to play music to them via voice control using any other Alexa or Google Assistant enabled device.

The $ 179 Sonos One SL is now the least expensive offering in Sonos’ own lineup – but the $ 149 Sonos x Ikea bookshelf speaker is the lowest-price Sonos-compatible offering overall. They’re a lot closer than you might think in terms of quality and other factors that would contribute to a buying decision, but the Sonos One probably has a slight edge in sound, where the Ikea bookshelf speaker is a bit more versatile in terms of mounting and installation options.

Sonos One SL is up for pre-order now, and will be shipping as of September 12.

The global smart speaker market grew 55.4% in the second quarter to reach 26.1 million shipments, according to a new report from Canalys. Amazon continued to lead the race, accounting for 6.6 million units shipped in the quarter. Google, however, fell to the third spot as China’s Baidu surged ahead. Baidu in Q2 grew a sizable 3,700% to reach 4.5 million units, overtaking Google’s 4.3 million units shipped.

China’s market overall doubled its quarterly shipments to 12.6 million units, or more than twice the U.S.’s 6.1 million total. The latter represents a slight (2.4%) decline since the prior quarter.

Baidu’s growth in the quarter was attributed to aggressive marketing and go-to-market campaigns. It was particularly successful in terms of smart displays, which accounted for 45% of the products it shipped.

Meanwhile, Google was challenged by the Nest rebranding in Q2, the analyst firm said.

The report also suggested that Google should to introduce a revamped smart speaker portfolio to rekindle consumer interest. The Google Home device hasn’t been updated since launch — still sporting the air freshener-style looks it had back in 2016. And the Google Home mini hasn’t received much more than a color change.

Instead, Google’s attention as of late has been on making it easier for device manufacturers to integrate with Google Assistant technology, in addition to its increased focus on smart displays.

Amazon, by comparison, has updated its Echo line of speakers several times while expanding Alexa to devices with screens like the Echo Spot and Show, and to those without like the Echo Plus, Echo Dot, Echo Auto, and others — even clocks and microwaves, as sort of public experiments in voice computing. 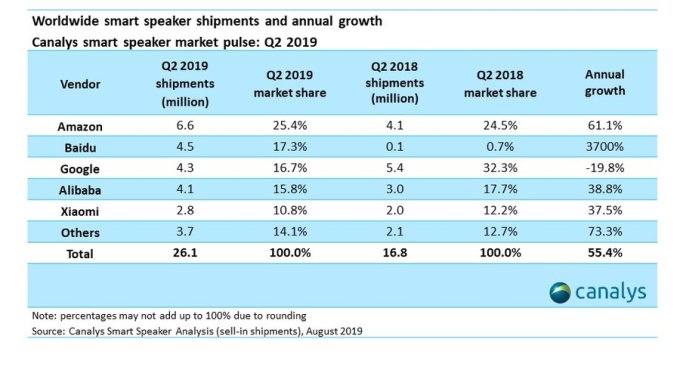 Beyond the top 3 — Amazon, Baidu and now No. 3 Google — the remaining top 5 included Alibaba and Xiaomi, with 4.1 million and 2.8 million units shipped in Q2, respectively.

The rest of the market, which would also include Apple’s HomePod, totaled 3.7 million units.

Sonos has an event coming up at the end of the month to reveal something new, but leaks have pretty much given away what’s likely to be the highlight announcement at the event: A new, Bluetooth-enabled speaker that has a built-in battery for portable power.

The speaker originally leaked earlier this month, with Dave Zatz showing off a Avery official looking image, and The Verge reporting some addition details including a toggle switch for moving between Bluetooth and Wifi modes, and a USB-C port for charging, along with rough dimensions that peg it as a little bit bigger than the existing Sonos One.

Now, another leak from Win Future has revealed yet more official-looking images, including a photo of the device with its apparent dock, which provides contact charging. The site also says the new speaker will be called the ‘Sonos Move,’ which makes a lot of sense, given it’ll be the only one that can actually move around and still maintain functionality while portable.

Here’s TL;DR of what we know so far, across all the existing leaks:

No word yet on official availability or pricing, but it’s reasonable to expect that it’ll arrive sometime this fall, following that late August announcement.