Tim Cook is not a fan of Rich Communication Services (RCS). The Apple CEO made this clear at the Code 2022 conference, when an audience member asked Apple to adopt RCS so his mother could better see the videos he sends, Cook told him, “Buy your mom an iPhone.”

For the uninitiated, RCS is like hypercharged SMS that lets you send high-quality multimedia files like other chat apps such as WhatsApp and Telegram, while also providing now-standard messaging features like typing indicators, delivery and read receipts, among other things.

There’s been a long-standing debate about blue bubbles for iMessage and green bubbles for other text messages on the iPhone. Google has been pressuring Apple to adopt Rich Communication Services (RCS) so Android users can send multimedia messages to iPhone users and the bubble war would end forever. Recently, it launched a new campaign in an attempt to sway consumer sentiment to its side of this fight, arguing that it’s now on Apple to “fix texting.”

The campaign’s website notes: “It’s not about the color of the bubbles. It’s the blurry videos, broken group chats, missing read receipts and typing indicators, no texting over Wi-Fi and more. These problems exist because Apple refuses to adopt modern texting standards when people with iPhones and Android phones text each other.”

Currently, there are more than 500 million RCS users across the world using Google’s messaging app.

But Cook claimed Apple customers weren’t demanding this support. As reported by The Verge, Cook said “I don’t hear our users asking that we put a lot of energy in on that at this point,” when responding to a question about RCS support.

The issue of different bubbles doesn’t exist if you use other messaging apps like WhatsApp, Signal, Messenger or Telegram — which is one reason why customers have turned to third-party solutions over built-in clients. But first-party solutions still have a draw and many iPhone owners continue to use iMessage as their preferred chat app. Apple understands that maintaining a closed iMessage system also encourages people to buy iPhones as they don’t want to end up as the green bubble in their group chats.

For the price of a cup of coffee, your teen can learn how to invest in cryptocurrency.

Today, Stack released what CEO Will Rush says is “the first crypto education and trading app for teens and their parents.”

The subscription-based app costs $3 per month per user and is available for Android. It was designed with Gen Z in mind, a generation that will grow up with the blockchain and most likely own some kind of digital assets, Rush told TechCrunch.

He co-founded the company with CTO Natalie Young and CCO Angela Mascarenas in 2021. The founding team has an eclectic background that includes teen fintech app Copper and securities for Rush, while Mascarenas helped digitize the cookie ordering system for the Girl Scouts and Young was a T-Mobile engineer.

While at Copper, Rush led efforts to teach children about investing, but found that replacing the word “stock” with “crypto” was driving more engagement. He would also see Reddit posts from teens trying to get into crypto using their parents’ information to create an account on exchanges like Coinbase or Robinhood and having them be frozen — and rightly so — for not being of-age to have an account.

“Clearly this was a thesis that no one was taking a trailblazing effort on,” Rush told TechCrunch. “How do we be the good guys and create a safe and educational ecosystem?”

Coinbase and Robinhood already dominate the crypto exchange space, but Rush believes Stack stands out from the crowd by offering features like access to the tax and control advantages of a Uniform Transfers to Minors Act (UTMA) account and a trading environment designed specifically for teens. And, when teen users reach 18 years old, the assets transfer into their name. Users can also earn rewards as they learn, which may translate into getting the app for free.

It is also limiting the assets being offered to protect its users, Rush said. It will start with seven cryptocurrencies, like Bitcoin, Ethereum and Cardano. Stack also doesn’t allow off-platform transfers, which Rush believes will cut down on up to 98% of the cryptocurrency fraud and scams that plague exchanges.

“By making those few decisions we think we can offer a better educational product,” he added.

Meanwhile, the app launches with more than 6,000 users on the waitlist and follows a $2.7 million investment from Madrona, The Venture Collective, Santa Clara Ventures and a group of angel and individual investors. The new investment gives Stack just over $3 million in total funding to date.

The new capital infusion will enable the company to continue building out its app and its high school-focused financial literacy program. Rush also wants Stack to gain more financial licenses and expand its offerings. The company has eight employees currently, and he expects to hire two more this year.

Next up, the company will perform what Rush calls “a more thoughtful overhaul of its educational content” that includes creating compelling financial content similar to what is popular on TikTok and YouTube.

“We need a big lift to make it relevant to teenagers and are looking at educational topics like NFTs, metaverse and web3,” he said. “We aim to be the trusted account for democratizing investing for young people.”

How the upcoming Ethereum Merge could change crypto’s rewards, costs and reputation

Edited to change the name of the company to Stack instead of Stack.io.

Twitter is testing a new way to share tweets in India, by adding a WhatsApp button under the posts for Android users. People will be able to share tweets with their contacts and groups on WhatsApp by tapping on the new button and selecting the WhatsApp option again — which is cumbersome and confusing.

The WhatsApp share button will replace the regular share button under the tweet, which opens different options like bookmarking, sending via Direct Message, copy link to Tweet and sharing to other social media platforms. The WhatsApp icon is just replacing the share icon without changing the functionality, making it an incoherent implementation.

some of you might see a WhatsApp Share icon and if you do, let us know what you think pic.twitter.com/Y23vWUPTs1

Given WhatsApp’s popularity in India, this is not surprising. The chat app has more than 400 million users in the country, and it is one of the most used apps to share content with friends and family in the country. So Twitter is trying to tap into the mass appeal of the Meta-owned messaging app and direct more users toward its platform.

“Starting today, we are rolling out a new experiment exclusively in India – an important market for us. We are replacing the share icon on Tweets with the WhatsApp icon for the majority of people who use Twitter on Android in the country, so sharing their favorite or noteworthy Tweets is easy even beyond Twitter, making the experience more open, accessible, and holistic for them,” Shirish Andhare, director and product head, Twitter India said.

Twitter’s not the first social network to experiment with the “share to WhatsApp” button in India. Local language social network ShareChat, backed by the likes of Twitter and Google, has a similar button next to all their posts, with a counter for the number of shares.

While usually Twitter limits its tests to a select set of users, this new test will be available to the majority of Twitter for Android users in India. But given it’s an experiment, the company could scrap this new sharing feature altogether.

Google has abused the dominant position of Android in India to illegally hurt competitors in the world’s second largest internet market, a two-year antitrust probe by the nation’s watchdog has found.

The Android-maker reduced device manufacturing firms’ ability and incentive to develop — and sell — devices running alternative versions of Android (more popularly known as forks), the probe found, according to two people have have been briefed on the findings.

Additionally, the report found Google’s requirement to make it mandatory for device manufacturers to pre-install its apps to be in violation of India’s competition law.

More than five dozen firms including Amazon and Apple responded to queries from the Indian watchdog — the Competition Commission of India — during the course of the investigation, the report said.

The Indian watchdog also found issues with the way Google has enforced policies on Play Store, saying those are “one-sided, ambiguous, vague, biased and arbitrary.”

Google said it looks forward to engage with the CCI to demonstrate how “Android has led to more competition and innovation, not less.”

The report’s findings — which are yet to be formally published by the CCI — is the latest setback for Google in India, where it is facing several other antitrust probes and daggers from a growing number of domestic startups, founders, and investors.

The Alliance of Digital India Foundation, a group of 350 startups, founders and investors, lauded the CCI report’s findings and said the watchdog’s step “is in line with the Indian digital ecosystem’s needs.”

Following entries into the newsletter market from tech companies like Facebook and Twitter, Google is now experimenting with newsletters, too. The company’s internal R&D division, Area 120, has a new project called Museletter, which allows anyone to publish a Google Drive file as a blog or newsletter to their Museletter public profile or to an email list.

The effort would essentially repurpose Google’s existing document-creation tools as a means of competing with other newsletter platforms, like Substack, Ghost, Revue and others, which are today attracting a growing audience.

Google’s experiment was spotted this week by sites including 9to5Google and Android Police.

Reached for comment, an Area 120 spokesperson declined to share further details about Museletter, saying only that it was “one of the many experiments” within the R&D group and that “it’s still very early.”

From the Museletter website, however, there is already much that can be learned about the project. The site explains how Google Drive could be monetized by creators in a way that would allow Google’s newsletter project to differentiate itself from the competition. Not only could newsletters be written in a Google Doc, other productivity apps could also be used to share information with readers. For example, a newsletter creator could offer a paid subscription plan that would allow readers to access their Google Slides. A creator who writes about finance could publish helpful spreadsheets to Google Sheets, which would be available to their subscribers. 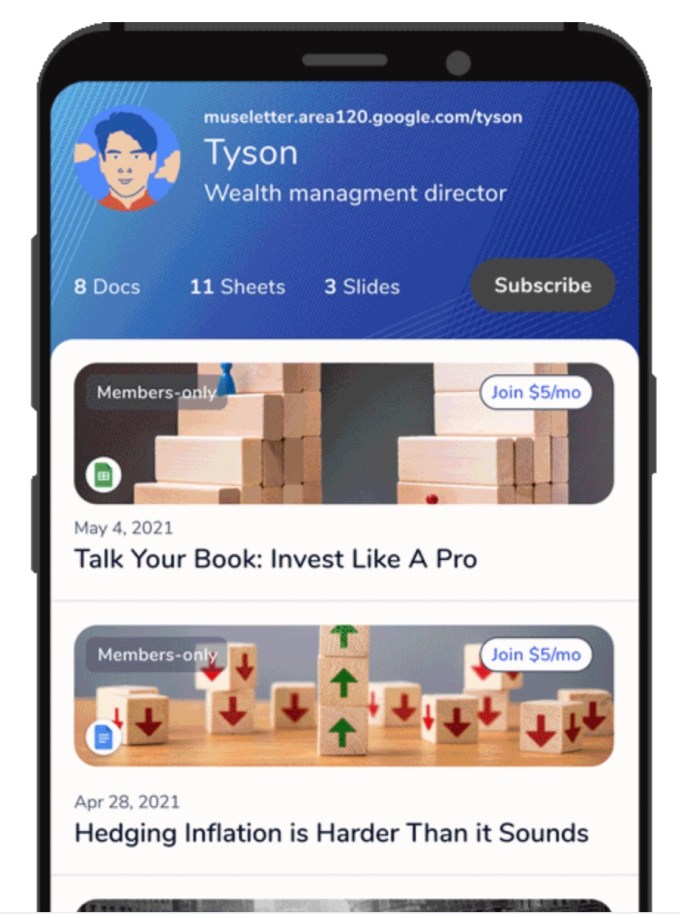 To make this possible, Museletter publishers would create a public profile on their Google Drive, then publish any Google Drive file directly to it. This provides them with a landing page where they can market their subscriptions and showcase how many different Drive files they’ve made publicly available across Docs, Sheets and Slides.

Creators can also optionally publish to an email list — including a list brought in from other platforms. The newsletter subscriptions can be free or paid, depending on the creator’s preferences, but using Museletter itself will be free. Instead, the project aims to monetize with premium features like custom domains, welcome emails and more.

The platform also promises tools and analytics to engage audiences and track the newsletter’s performance.

While the site doesn’t mention any plans for advertising, a success in this space could provide Google with a new ad revenue stream — and one that arrives at a time when the tech giant’s multibillion-dollar advertising market has a new challenger in the form of Amazon, whose own ad business could eventually challenge the Facebook-Google duopoly.

Google didn’t say when it plans to launch Museletter, but the website is offering a link to a form where users can request early access.