Skip to content
The task of 2022 will be figuring out how much action we’re willing to take and how much disease and death we’ll tolerate.
Changes small and large—parklets, outdoor restaurants, bike lanes—could remake our relationship to cities (and help fix climate change).
SpaceX, Blue Origin, and Virgin Galactic finally made commercial spaceflight possible. Now there are questions about the purpose of these exclusive trips.

On a congested sidewalk next to a busy mall in Shenzhen, a 20-something woman uses a smartphone app to order a milk tea on Meituan, a major food delivery company. In under ten minutes, the pearl-white drink arrives, not on the back of one of the city’s ubiquitous delivery bikes, but descending from the cloudy heavens, in a cardboard box on the back of a drone, into a small roadside kiosk. The only thing the scene is missing is a choir of angels.

Over the past two years, Meituan, one of China’s largest internet companies, has flown 19,000 meals to 8,000 customers across Shenzhen, a city with close to 20 million people. The pilot program is available to just seven neighborhoods, each with a three-kilometer stretch, and only from a select number of merchants. The drones deliver to designated streetside kiosks rather than hover outside people’s windows as envisioned by sci-fi writers. But the trials are proof of concept for Meituan’s ambitions, and the company is now ready to ramp up its aerial delivery ambitions.

On the back of the pilot program, Meituan has applied to operate a commercial drone delivery service across all of Shenzhen, Mao Yinian, head of the company’s drone delivery unit, said at a press event this month. The application, submitted in September, is currently under review by Shenzhen’s aviation authority and is expected to receive approval in 2022, though the actual timeline is subject to government decisions.

“We went from experimenting in the suburbs to a central area. That means our operational capability has reached a new level,” said Chen Tianjian, technical expert at Meituan’s drone business, at the same event.

Meituan’s self-developed drone just placed a milk tea order into its delivery station, from which the customer can pick up the drink using its app. Took 4 mins for the drone to arrive from the merchant 3km away. pic.twitter.com/F52lhLeowA

At the moment, Meituan’s delivery drones still involve a good amount of manpower. Take the milk tea order, for example. Once the drink is ready, Meituan’s backend dispatch system assigns a human courier to fetch it from the merchant in the mall to the roof of the complex, where the company has set up drone takeoff pads. 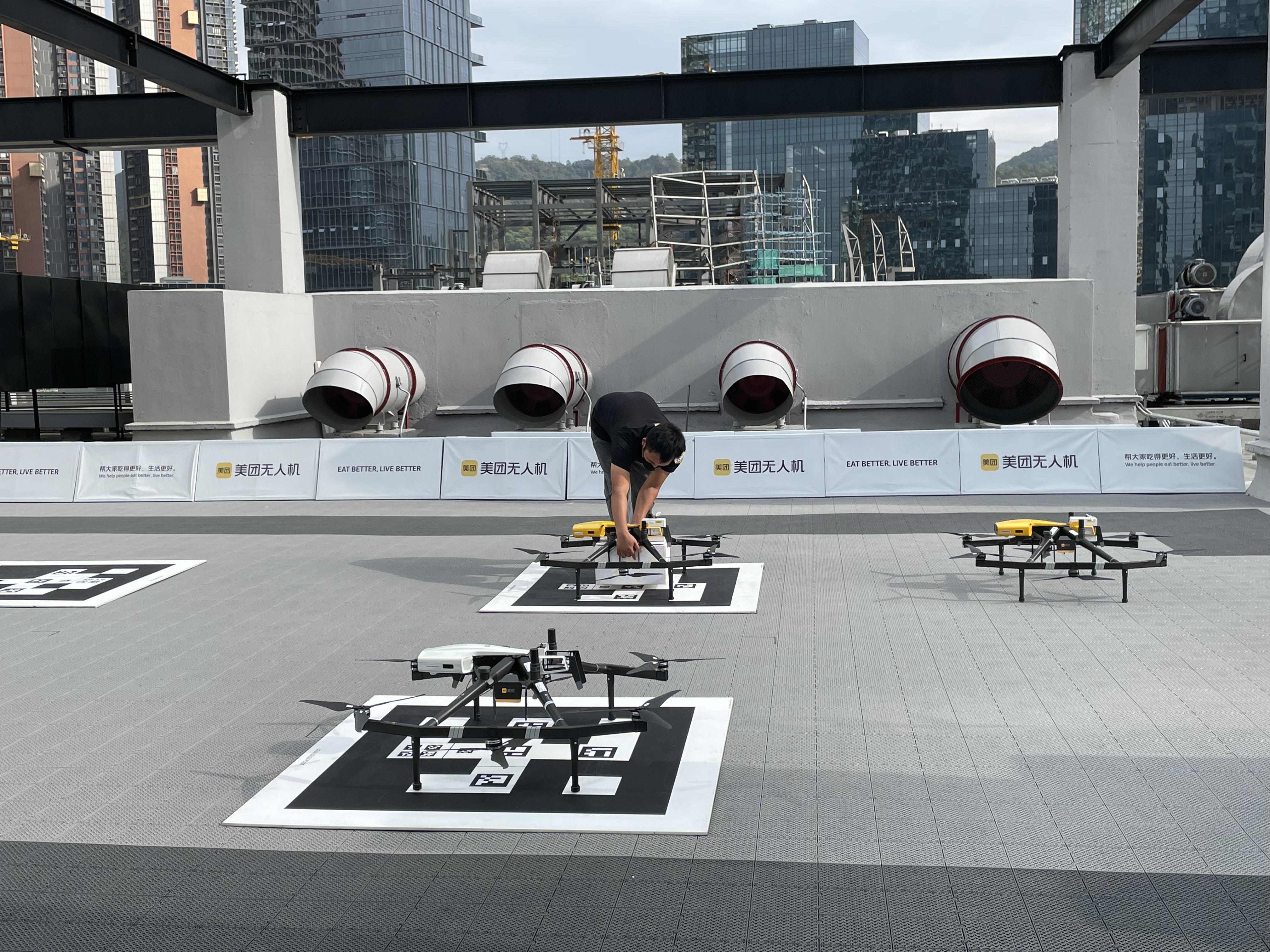 Meituan’s drone launching pads on the roof of a mall in Shenzhen / Photo: TechCrunch

Before takeoff, an inspector checks to see if the box holding the drink is secure. Meituan’s navigation system then calculates the quickest and safest route for the flyer to reach the pickup kiosk and off it goes, the milk tea into the sky.

The economic viability for using drones to deliver food of course is still unproven. Each of Meituan’s small aircraft, which are built with carbon fiber and weigh around 4 kilograms, can carry about 2.5 kilograms of food — roughly the weight of an average two-person meal, according to Chen. If someone orders just one cup of milk tea, the remaining space is wasted. Each kiosk can hold about 28 orders, so at peak hours, Meituan is betting on customers to gather their food promptly.

There’s also the matter of creating waste with the new delivery boxes. Meituan said it has set up recyclable bins next to the kiosks, but customers are also free to keep the containers. It won’t be surprised if some simply chuck them in the trash.

Lessons from the U.S.

From 2017 to 2018, China’s civil aviation authority started “following” the U.S. in light of research done by the Federal Aviation Administration on low-altitude aerial mobility, according to Chen. Not long after, the Chinese regulator began formulating guides and rules for this budding field. Meituan has similarly studied the paths of its American drone counterparts, but it realizes there isn’t a one-size-fits-all solution, as the two countries vary markedly in population density and consumer behavior. 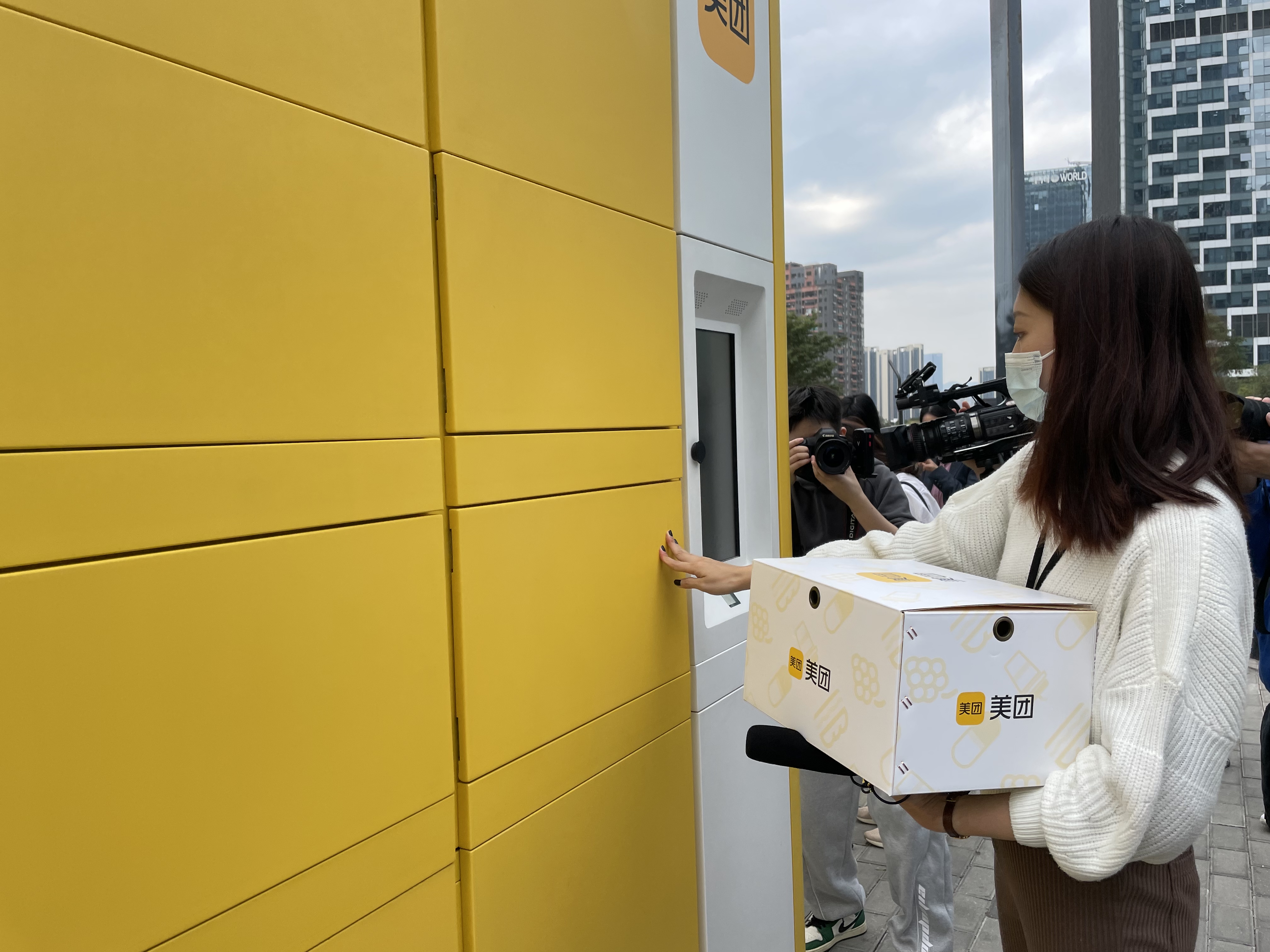 A customer picks up her order from Meituan’s drone landing kiosk in Shenzhen. / Photo: TechCrunch

Most Americans live in suburban sprawl, while in China and many other Asian countries, people are concentrated in urban clusters. As a result, drones in the U.S. are “focused more on endurance,” Chen said. Drones developed by Google and Amazon, for example, tend to be “fixed-winged with vertical landing and takeoff abilities,” while Meituan’s solution falls into the category of a small helicopter, which is more suited for complex urban environments.

Technologies emerging in the U.S. often offer useful clues to similar developments in China. The picture doesn’t look particularly rosy at Amazon Prime Air. The behemoth’s drone delivery business reportedly has been missing deadlines and laying off staff, though the firm said the unit continued to “make great strides.”

Prime Air, Chen argued, “doesn’t seem to have a clear strategy” and “has been vacillating between” neighborhood delivery, which is the focus of Alphabet’s Wing, and long-distance transport, which is UPS’s strong suit. He continued:

If you look at the competition between China and the U.S. in low-altitude aerial logistics, the important thing is to figure out one’s strategic position. Everyone can design a UVA. The question is what kind of UVA and for what customers.

When asked about the safety of drone delivery, Chen said Meituan’s solution “strictly follows” the rules laid out by the “civil aviation authority.” The Beijing-headquartered company picked Shenzhen as its testing field not only because it’s home to drone giant DJI and a mature UAV supply chain. The southern metropolis, known for its economic experiments, also has some of the most friendly drone policies in China, the expert said.

Each of Meituan’s drones is registered with Shenzhen’s Unmanned Aircraft Traffic Management Information Service System (UATMISS). During flights, they are required to pin UATMISS with their precise locations every five seconds. More important, Meituan’s navigation system works to ensure the flyers avoid crowds and built-up areas on the ground, even at the cost of making detours. 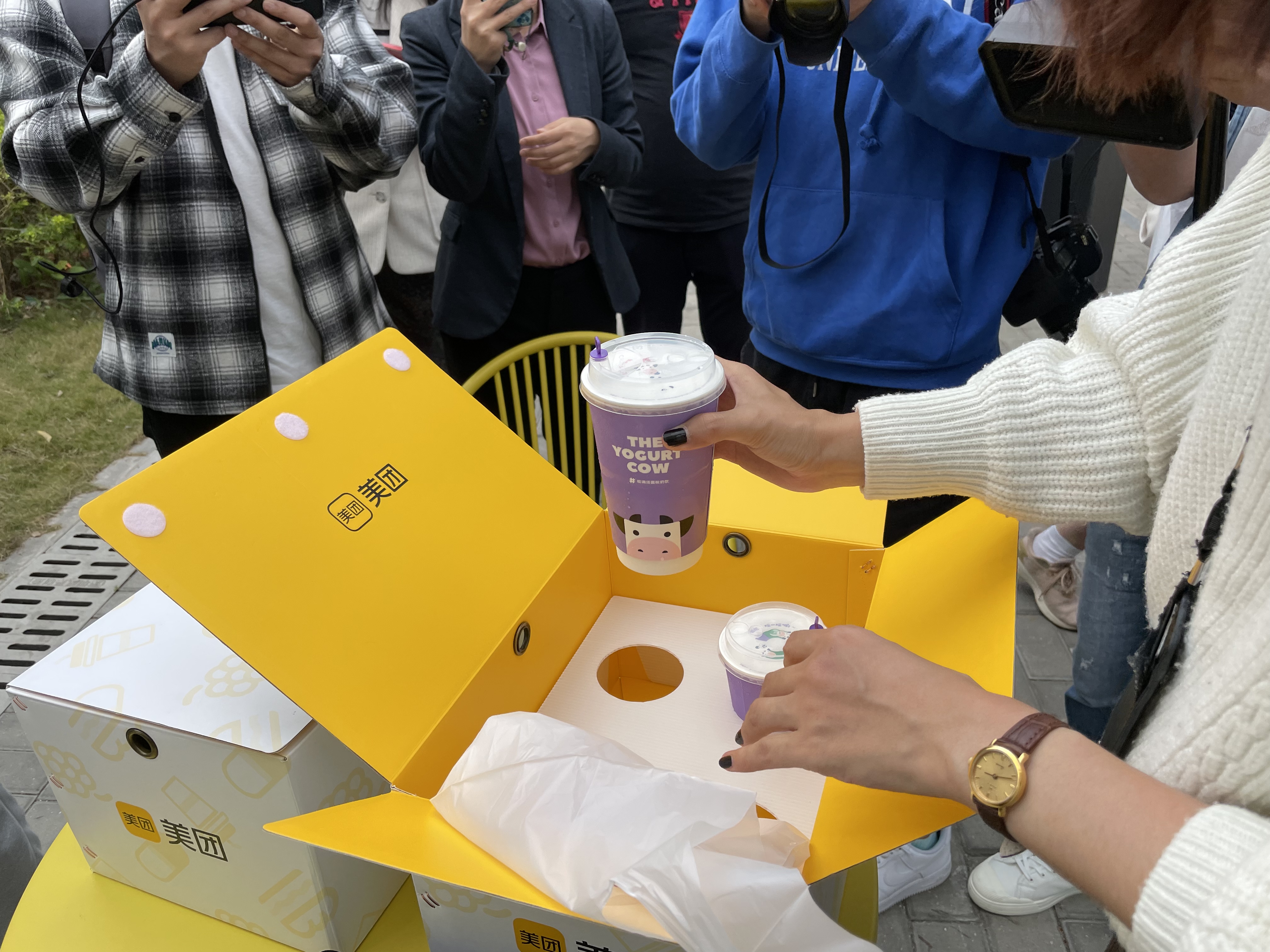 The drones being piloted are Meituan’s third iteration on the model. They boast a noise level of about 50 decibels heard from a 15-meter distance, which is equivalent to “daytime street level,” according to Chen. The next generation will be even quieter with noise reduced to “nighttime street level.” But the small aircraft can’t be too quiet, as regulators have advised that having an acceptable level of noise “is safer.”

Meituan doesn’t plan to replace its millions of couriers in China with unmanned flyers outright, though automation would take some load off its overworked delivery platform. Its dispatch algorithms have come under criticism from both the public and the government for allegedly putting business performance business above rider safety. The challenge to recruit workers has already prompted labor-intensive industries to seek out robotic help.

Meituan’s goal is to find a sweet spot for human-robot collaboration. Shenzhen’s road infrastructure is notoriously unfriendly to scooter drivers and cyclists, but aerial travel isn’t restricted by such ground obstructions. Drones can fly over large interchanges and put meals at spots convenient for couriers to fetch and carry to customers’ final destination.

Meituan is already envisaging more automation. For instance, rather than having its staff manually swap depleted drone batteries, it has done R&D on automated battery swap stations. It’s also exploring a conveyor belt-like system that can move items from restaurants to drone takeoff pads nearby. These solutions are still years from large-scale deployment, but the food delivery titan is clearly gliding into an automated future.

As a remote island nation in the middle of the South Pacific, New Zealand is experiencing the stirrings of a burgeoning startup scene. The country has historically been capital-starved, but recent investments from the government and foreign investors have significantly increased access to early-stage venture capital funding. Now, certain industries are emerging as potential areas where New Zealand can win in the tech space.

Deep tech, medtech/biotech, climate tech, and crypto and blockchain are all areas that investors say they’re either actively investing in or watching for signs of scale.

Note: All monetary amounts are listed in New Zealand dollars unless otherwise stipulated.

New Zealanders make really good founders. … There’s something about just growing up on a farm or, you know, playing beer float out in the lakes and rivers; New Zealand is just really resourceful. Blockchain NZ Chair Bryan Ventura

Then there are groups, like Outset Ventures, formerly LevelTwo, that are geared toward helping seed and pre-seed deep tech startups get going. Outset is home to New Zealand’s only two deep tech unicorns, Rocket Lab and LanzaTech, both of which have spun out numerous other deep tech companies. Outset continues to be a resource for seed-stage startups that need not only money, but also connections to larger companies and access to workshops and labs. Just last year, Outset and Icehouse Ventures, a VC firm, partnered to raise a $12 million fund, which launched this April, for early-stage science and engineering startups. Imche Fourie, CEO of Outset, said the company has already made 40 investments from that fund.

Notable deep tech companies out of New Zealand include Foundry Lab, a startup that creates metal castings quickly and cheaply with a microwave; Soul Machines, a platform that creates lifelike digital avatars that animate autonomously, responding to interactions and interpreting facial expressions, with personalities that evolve over time; and Dennisson Technologies, a wearables company that’s developing soft exosuits that incorporate 4D material technology to actively assist people with limited mobility due to physical or neurological disability.

The most Kiwi of deep tech startups, however, is Halter — a company that spun out of Rocket Lab and produces solar-powered smart cow collars that allow farmers to remotely shift and virtually fence and monitor cows in order to optimize pasture time. Founder Craig Piggott grew up on a dairy farm watching his parents struggle with the relentless work. After studying engineering at Auckland University of Technology and working at Rocket Lab, Piggott combined his experience to come up with a somewhat wacky and ambitious hardware and software play. Rocket Lab founder Peter Beck, who backed Halter, told TechCrunch he thinks it will be a globally scalable billion-dollar company.

The epitome of New Zealand’s deep tech scene is its over $1.75 billion space industry. Rocket Lab, which is now a U.S.-owned company after a SPAC merger, put New Zealand on the map as a place with minimal air traffic, clear skies and favorable aerospace regulations. As a result, companies are forming that can either send payloads into space or provide services to existing space companies.

Outset-backed Zenno Astronautics, for example, is developing a fuel-free satellite propulsion system that uses magnets powered by solar panels. Dawn Aerospace is working toward a remotely piloted aircraft that could take off like a normal airplane, drop a satellite payload and be back home in 15 minutes. And Astrix Autonautics, a startup founded by three Auckland University students, is being trialed by Rocket Lab to see if they can more than double the power-to-weight ratios of solar arrays used today.