There’s no doubt that Apple’s self-polished reputation for privacy and security has taken a bit of a battering recently.

On the security front, Google researchers just disclosed a major flaw in the iPhone, finding a number of malicious websites that could hack into a victim’s device by exploiting a set of previously undisclosed software bugs. When visited, the sites infected iPhones with an implant designed to harvest personal data — such as location, contacts and messages.

As flaws go, it looks like a very bad one. And when security fails so spectacularly, all those shiny privacy promises naturally go straight out the window.

The implant was used to steal location data and files like databases of WhatsApp, Telegram, iMessage. So all the user messages, or emails. Copies of contacts, photos, https://t.co/AmWRpbcIHw pic.twitter.com/vUNQDo9noJ

And while that particular cold-sweat-inducing iPhone security snafu has now been patched, it does raise questions about what else might be lurking out there. More broadly, it also tests the generally held assumption that iPhones are superior to Android devices when it comes to security.

Are we really so sure that thesis holds?

But imagine for a second you could unlink security considerations and purely focus on privacy. Wouldn’t Apple have a robust claim there?

On the surface, the notion of Apple having a stronger claim to privacy versus Google — an adtech giant that makes its money by pervasively profiling internet users, whereas Apple sells premium hardware and services (including essentially now ‘privacy as a service‘) — seems a safe (or, well, safer) assumption. Or at least, until iOS security fails spectacularly and leaks users’ privacy anyway. Then of course affected iOS users can just kiss their privacy goodbye. That’s why this is a thought experiment.

But even directly on privacy, Apple is running into problems, too.

To wit: Siri, its nearly decade-old voice assistant technology, now sits under a penetrating spotlight — having been revealed to contain a not-so-private ‘mechanical turk’ layer of actual humans paid to listen to the stuff people tell it. (Or indeed the personal stuff Siri accidentally records.)

By now, the venture world is wary of blood testing startups offering health data from just a few drops of blood. However, Baze, a Swiss-based personal nutrition startup providing blood tests you can do in the convenience of your own home, collects just a smidgen of your sanguine fluid through an MIT manufactured device, which, according to the company, is in accordance with FDA regulations.

The idea is to find out (via your blood sample) what vitamins you’re missing out on and are keeping you from living your best life. That seems to resonate with folks who don’t want to go into the doctor’s office and separately head to their nearest lab for testing.

And it’s important to know if you are getting the right amount of nutrition — Vitamin D deficiency is a worldwide epidemic affecting calcium absorption, hormone regulation, energy levels and muscle weakness. An estimated 74% of the U.S. population does not get the required daily levels of Vitamin D.

“There are definitely widespread deficiencies across the population,” CEO and Baze founder Philipp Schulte tells TechCrunch. “[With the blood test] we see that we can actually close those gaps for the first time ever in the supplement industry.”

While we don’t know exactly how many people have tried out Baze just yet, Schulte says the company has seen 40% month-over-month new subscriber growth.

That has garnered the attention of supplement company Nature’s Way, which has partnered with the company and just added $ 6 million to the coffers to help Baze ramp up marketing efforts in the U.S. 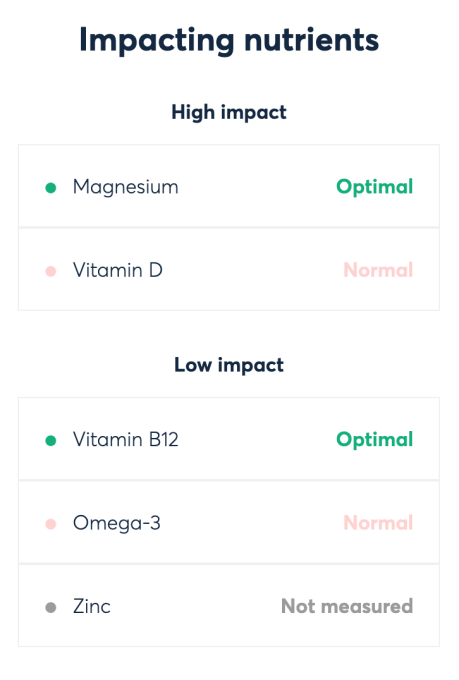 I had the opportunity to try out the test myself. It’s pretty simple to do. You just open up a little pear-shaped device, pop it on your arm and then press it to engage and get it to start collecting your blood. After it’s done, plop it in the provided medical packaging and ship it off to a Baze contracted lab.

I will say it is certainly more convenient to just pop on a little device myself — although it might be tricky if you’re at all squeamish as you’ll see a little bubble where the blood is being sucked from your arm. For anyone who hesitates, it might be easier to just head to a lab and have another human do this for you.

The price is also nice, compared to going to a Quest Diagnostics or LabCorp, which can vary depending on what vitamins you need to test for individually. With Baze it’s just $ 100 a pop + any additional supplements you might want to buy via monthly subscription after you get your results.

Baze’s website will show your results within about 12 days (though Schulte tells TechCrunch the company is working on getting your results faster). It does so with a score and then displays a range of various vitamins tested.

I was told that, overall, I was getting the nutrients I require with a score of 74 out of 100. But I’m already pretty good at taking high quality vitamins. The only thing that really stuck out was my zinc levels, which I was told was way off the charts high after running the test through twice. Though I suspect, as I am not displaying any symptoms of zinc poisoning, this was likely the result of not wiping off my zinc-based sunscreen well enough before the test began.

For those interested in conducting their own at-home test and aren’t afraid to prick themselves in the arm with something that looks like you might have it on hand in the kitchen, you can do so by heading over to Baze and signing up.

Drones and satellites make it easy to detect and plug methane leaks, benefitting oil and gas companies and the environment alike.
Science Latest

Biohackers inserted a device—a hard drive plus router—into their legs. They say it could improve data security, but it also raises knotty legal issues.
Science Latest

Apple isn’t the only smartphone manufacturer planning a big September launch. Huawei’s got a big event on the books as well, set for September 18 in Munich, just over a week after the new iPhones are unveiled. For Huawei, however, the Mate 30 announcement is about more than just smartphones.

The event is effectively the first big handset launch since the embattled Chinese manufacturer was added to the U.S. trade blacklist. The move had seemingly been a long time coming, after years of allegations ranging from spying to sanctions violations, but with the ban in place, the move will mark a key moment of truth for a company that has so far been dependent on offerings from U.S. companies like Google.

The Mate 30, which also marks a push into 5G, could potentially launch without Google apps. The recent U.S. government reprieve only applied to already announced products, according to a statement Google gave to Reuters. Trump has suggested that ban on Huawei products could be lifted with a new U.S.-China trade deal, further clouding the suggestion that the move made purely out of concerns for security.

That last bit is a clear allusion to HarmonyOS. The recently unveiled operating is largely limited to low end handsets and IoT device, but Huawei is also certainly readying itself for a longterm life after Google.

Meanwhile, CNBC is citing a source that suggests the phone will launch with or without Google apps, depending on how things shake out over the next few weeks. That would likely amount to a minor nuisance, requiring users to download them after purchase, while a full out Android brand would prove far more harmful to its bottom line.

It seems quite unlikely at the moment, however, that the company would attempt to launch such a high end device with its own partially baked operation system.