It’s hard to make a rocket when the senior members of your team keep graduating, taking their expertise with them. But these undergrads found a way.
Science Latest

There’s a whole lot of ocean on this planet, and we don’t have much of an idea what’s at the bottom of most of it. That could change with the craft and techniques created during the Ocean Discovery Xprize, which had teams competing to map the sea floor quickly, precisely, and autonomously. The winner just took home $ 4 million.

A map of the ocean would be valuable in and of itself, of course, but any technology used to do so could be applied in many other ways, and who knows what potential biological or medical discoveries hide in some nook or cranny a few thousand fathoms below the surface?

The prize, sponsored by Shell, started back in 2015. The goal was, ultimately, to create a system that could map hundreds of square kilometers of the sea floor at a 5-meter resolution in under a day — oh, and everything has to fit in a shipping container. For reference, existing methods do nothing like this, and are tremendously costly.

But as is usually the case with this type of competition, the difficulty did not discourage the competitors — only spurred them on. Since 2015, then, the teams have been working on their systems and traveling all over the world to test them.

Originally the teams were to test in Puerto Rico, but after the devastating hurricane season of 2017, the whole operation was moved to the Greek coast. Ultimately after the finalists were selected, they deployed their craft in the waters off Kalamata and told them to get mapping.

“It was a very arduous and audacious challenge,” said Jyotika Virmani, who led the program. “The test itself was 24 hours, so they had to stay up, then immediately following that was 48 hours of data processing after which they had to give us the data. It takes more trad companies about 2 weeks or so to process data for a map once they have the raw data — we’re pushing for real time.”

This wasn’t a test in a lab bath or pool. This was the ocean, and the ocean is a dangerous place. But amazingly there were no disasters.

“Nothing was damaged, nothing imploded,” she said. “We ran into weather issues, of course. And we did lose one piece of technology that was subsequently found by a Greek fisherman a few days later… but that’s another story.”

At the start of the competition, Virmani said, there was feedback from the entrants that the autonomous piece of the task was simply not going to be possible. But the last few years have proven it to be so, given that the winning team not only met but exceeded the requirements of the task.

“The winning team mapped more than 250 square kilometers in 24 hours, at the minimum of 5 meters resolution, but around 140 was more than 5 meters,” Virmani told me. “It was all unmanned: An unmanned surface vehicle that took the submersible out, then recovered it at sea, unmanned again, and brought it back to port. They had such great control over it — they were able to change its path and its programming throughout that 24 hours as they needed to.” (It should be noted that unmanned does not necessarily mean totally hands-off — the teams were permitted a certain amount of agency in adjusting or fixing the craft’s software or route.)

A 5-meter resolution, if you can’t quite picture it, would produce a map of a city that showed buildings and streets clearly, but is too coarse to catch, say, cars or street signs. When you’re trying to map two thirds of the globe, though, this resolution is more than enough — and infinitely better than the nothing we currently have. (Unsurprisingly, it’s also certainly enough for an oil company like Shell to prospect new deep-sea resources.)

The winning team was GEBCO, composed of veteran hydrographers — ocean mapping experts, you know. In addition to the highly successful unmanned craft (Sea-Kit, already cruising the English Channel for other purposes), the team did a lot of work on the data processing side, creating a cloud-based solution that helped them turn the maps around quickly. (That may also prove to be a marketable service in the future.) They were awarded $ 4 million, in addition to their cash for being selected as a finalist.

The runner up was Kuroshio, which had great resolution but was unable to map the full 250 km2 due to weather problems. They snagged a million.

A bonus prize for having the submersible track a chemical signal to its source didn’t exactly have a winner, but the teams’ entries were so impressive that the judges decided to split the million between the Tampa Deep Sea Xplorers and Ocean Quest, which amazingly enough is made up mostly of middle-schoolers. The latter gets $ 800,000, which should help pay for a few new tools in the shop there.

Lastly, a $ 200K innovation prize was given to Team Tao out of the U.K., which had a very different style to its submersible that impressed the judges. While most of the competitors opted for a craft that went “lawnmower-style” above the sea floor at a given depth, Tao’s craft dropped down like a plumb bob, pinging the depths as it went down and back up before moving to a new spot. This provides a lot of other opportunities for important oceanographic testing, Virmani noted.

Having concluded the prize, the organization has just a couple more tricks up its sleeve. GEBCO, which stands for General Bathymetric Chart of the Oceans, is partnering with The Nippon Foundation on Seabed 2030, an effort to map the entire sea floor over the next decade and provide that data to the world for free.

And the program is also — why not? — releasing an anthology of short sci-fi stories inspired by the idea of mapping the ocean. “W lot of our current technology is from the science fiction of the past,” said Virmani. “So we told the authors, imagine we now have a high resolution map of the sea floor, what are the next steps in ocean tech and where do we go?” The resulting 19 stories, written from all 7 continents (yes, one from Antarctica), are available for download here.

The light twinkle of an old-fashioned cylinder music box evokes many things: nostalgia, childhood memories, sometimes even horror (they are a trope in scary movie soundtracks). Most music boxes play one tune, but with the Muro Box, which exhibited at Computex this week, you can use an app to pick different songs or even compose your own. It even doubles as a smart alarm clock.

Created by Tevofy Technology, a Taiwanese startup, the Muro Box’s components are mounted on a wooden base and visible underneath a glass cover, so you can watch as a 20-note steel comb creates music by plucking pins on its cylinder. The key difference between Muro and traditional music boxes, however, is that Muro’s cylinder is programmable. 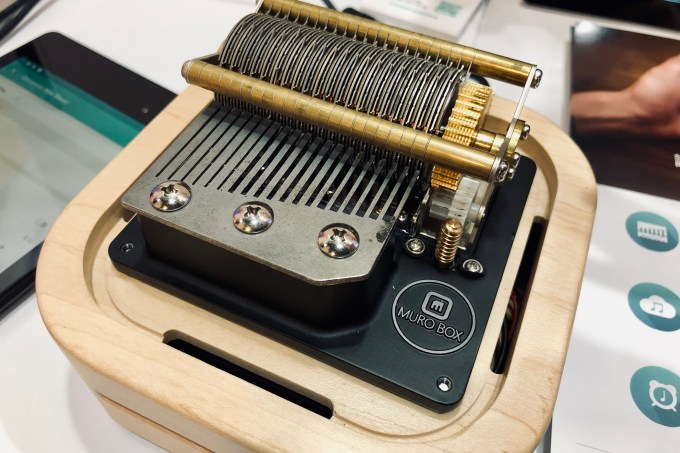 The Muro Box is a music box with a programmable cylinder

Instead of a fixed pattern of pins, Muro’s patented convertible cylinder features 20 stainless steel gears, to correspond with each tooth on the comb. Each gear is attached to an electronic magnet and commanded by an embedded microcontroller, which means Muro can play almost any melody.

A 2018 Golden Pin Design Award winner, the Muro Box is getting ready to launch its Indiegogo campaign, after completing a successful campaign on Taiwanese crowdfunding site Zec Zec last year.

At first glance, Tibbits look like building blocks, but each one is a module or a connector that makes it easier to build connected devices and systems. Tibbits were created by Tibbo Technology, a Taipei-based startup that exhibited at Computex this week (it showed off a humanoid robot built from various Tibbits). 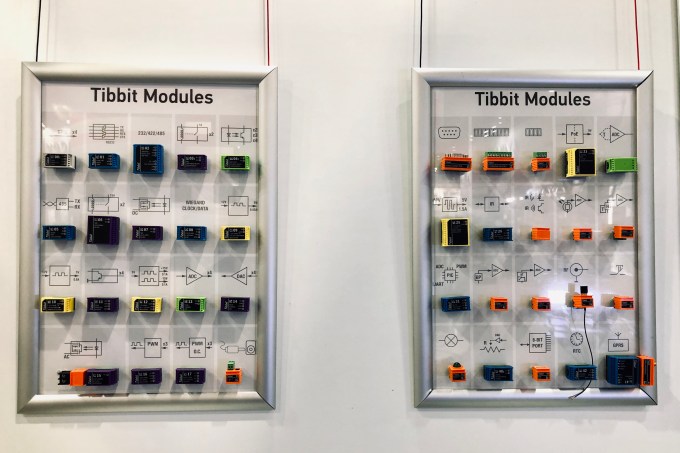 The heart of the Red Dot Award-winning Tibbo Project System (the company used bright colors to make its modules stand out from other hardware) is the Tibbo Project PCB, which includes a CPU, memory and Ethernet port. Then you pick Tibbits, with pre-programmed functionality (such as RS232/422/485 modules, DAC and ADC devices, power regulators, temperature, humidity or pressure sensors or PWM generators), to plug into your PCB. Once done, you can place your project in one of Tibbo’s three enclosure kits (custom enclosures are also available).

Tibbo also offers an online configurator that lets you preview your device to see if it will work the way you want before you begin building, and its own programming languages (Tibbo BASIC and Tibbo C) and app development platform.

Sure, long-haul space travel demands a solid vehicle and ample food. But to stay sane during those lonely days, you might just want a good ol’ pillow.
Science Latest